About Autors
Text, distributional maps and specimens from collections.
Photographs of beetles and biotopes in nature. 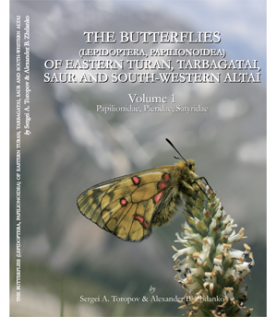 The first volume of the book combines characters of scientific edition and photo album and may be used as an illustrated guide to butterflies of the superfamily of Papilionoidea in Eastern Turan, Tarbagatai, Saur and South-western Altai. This book includes 88 essays in Russian and English involving representatives of the families of Papilionidae, Pieridaeand Satyridae. Data on type locality, general area of distribution, typical habitats, pre-imaginal stages and life-history are presented in each essay, of which text is illustrated with colour photographs of collection specimens, butterflies in a natural setting, pre-imaginal stages, food-plants and typical biotopes. Spreading of subspecies is given in the distribution map for each species. This edition is a prolongation of a series (first book, also in two volumes, was devoted to Papilionoidea fauna in Dzhungar, Tien Shan, Alai and Eastern Pamirs).